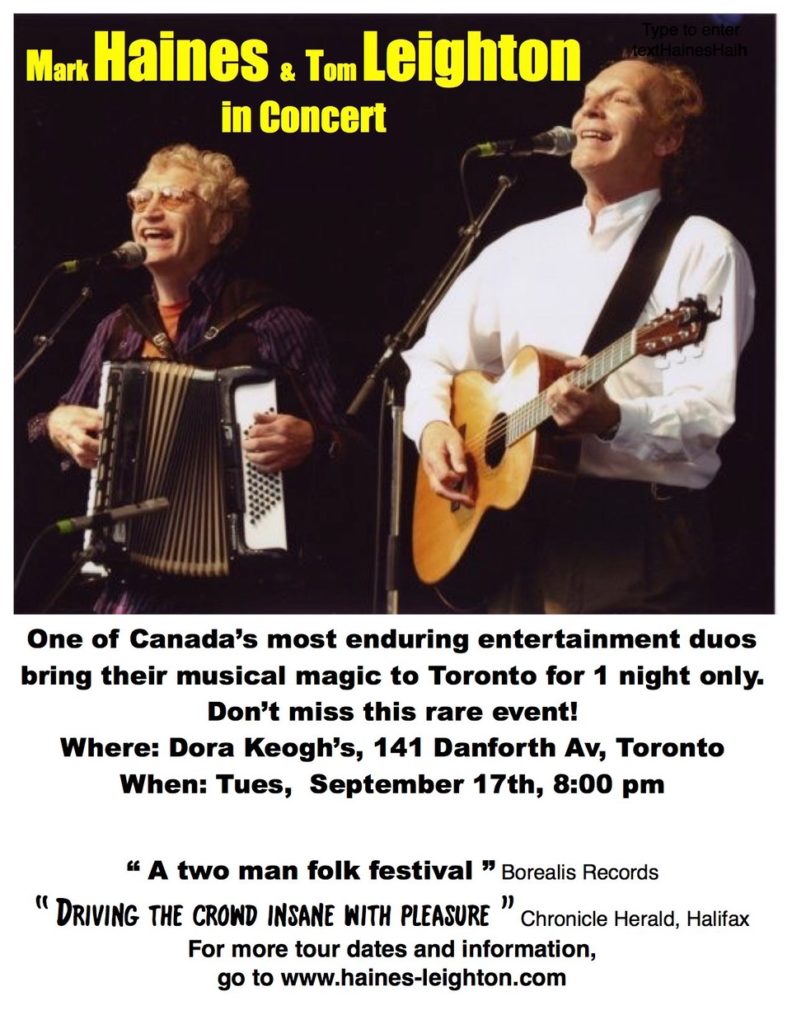 I had a great gig with Mark this past week in Ottawa for a national conference of Food Service Professionals. we were able to do all sorts of music styles – everything from old timey jigs and reels to dance music. The bonus was Island comedian Patric Ledwell was also part of our show. He was a riot.

Both he and Mark are performing together most of the summer (again), It was a really fun show. Theatre details will be posted ASAP.

Mar 25th I was able to perform at the Marine Museum, Port Dover last week. It’s the perfect place to be IF you HAD to be locked in a room for 24 hrs. Curator and faboulis musician Ian Bells has really made this place an essential part of the community. The reason the I was there was to play piano for a full length silent movie called “Steamboat Bill Jr.” staring Buster Keaton. It was really fun. I used lots of more “modern” themes that people would recognize to set up different scenes but played them in the older style. That approach gave more laughs to the audience. …. AND I had a chance to use my arm suspenders once again.

Here is a review of Mark and My performance for the Cuckoo’s Nest Folk club in London. We were both delighted with the music and their response. Tom

Great night at the Cuckoo’s Nest on Sunday with Mark Haines and Tom Leighton! Place was packed with familiar faces and new. Lady beside me came specially from Burlington. Although I’ve often seen Tom accompanying others, somehow I’d managed to miss the duo playing together – my loss!

Mark, who lives in P.E.I., and Tom, in Toronto, have been playing music together for around twenty five years. As members of The Zippers way back, they were often at London’s Fryfogle’s Tavern and its metamorphosis, Leadbelly’s, where Brian Mortimer convinced them that the two of them could go it alone. They told a lovely story about their first album release party where no sales were happening. Brian announced that a free shot of Jack Daniels went with every purchase – sales were brisk!!  I’m sure there’s a great lesson there for all us recording star wannabes, but, damn, even a beer destroys the best part of $10 these day. But I digress…

Their promo on the Nest’s poster was basically a one-liner with things like “rooted in tradition”; “engaging humour”; and “rambled the back roads of Ontario, Maritimes, Britain and New York.” The songs and tunes they played and the stories they told certainly lived up to these claims. They did covers such as Dylan’s When the Ship Comes In and Doug McArthur’s Boots and Saddles. Traditional tunes included The Immigrant and a song telling of an Irish family’s hopes and ultimate destruction by cruelly avaricious absentee landlords and their rent collectors. Mark’s voice has a sort of smoky quality that wrapped itself around the audience making this ballad all the more poignant.

Their original compositions gave us lovely tunes and wonderful lyrics while all their arrangements were fresh, engaging and often totally unexpected. Tom played the bodhran then set it down and picked up the accordion – but the drum kept playing!! He’d very smoothly just recorded several bars of it in a “loop” and the audience loved it. Incidentally these drums have a goat skin head and the song was all about a young goat aspiring to be …a bodhran!!! Oh yes and we all had to practice pronouncing “BOW- RON”  not “BOD- RAN” so we could sing the refrain. So now you know too!

The evening was a delight and over too soon. They are both amazing musicians, singers and writers. They are also very funny, regaling the audience with jokes, stories and outrageously camp routines. Their version of a Brother Love’s type travellin’ salvation meeting assuring us of redemption if only we’d buy a CD – or six depending on the severity of our sins!! – and their Haaaaaaaappy Biiiirrrrthday where the recipient had to stand on a chair.

Oh, you had to be there! So be sure you are the next time they’re in town.
I will be.

Go to www.haines-leighton.com for more info.

Bob Cunningham, originally from England, has been involved in the Canadian folk music scene since the early 60’s as performer, guitar teacher and music school owner. His recordings with various groups have been played on CBC and as far away as Australia. Bob has performed coast to coast from coffee house to festival stage, schools to retirement homes – and more pubs than is decent! London has been home for many years where he sings with his newest group, Scallywag.

Jan 5th/ ’13 Mark Haines is coming up to Southern Ontario for a few selected dates. It’s been quite awhile since he has performed in Ontario so he and Tom will have a LOT of music to catch up on. Both have been very busy performing with others so it won’t be a question of being rusty, but more like how to fit in all the material that they like to play together. It will also be a blend of their concert material (especially at the Cuckoo’s Nest Folk Society) and more of their unique covers of “bar” material. It will be wonderful to see old – AND new  – friends.

Sept ’12
Whew! the summer just flew by. It had some musical high points but also 2 visits to N.B. for “family business”.
Tom got to be part of some music festivals including Mariposa as part of Muddy York. This is the beefed up duo of Anne Lederman and Ian Bell. They specialized in music of early Ontario so were in demand in a year that celebrated the War of 1812. Never to settle with straight tradition they added other musicians including Pat O’Gorman on various pipes and whistles plus steel pans, karnetic violin, Tom on the electric keys and Jacko Backo on djembe and kalimba.
Once again Tom was invited back to Blue Skies and Summerfolk to lead the community choir (open to anyone who wanted to sing). The big challenge is never knowing how many singers and their abilities. Arrangements are prepared, but Tom has to be ready to make changes at any time during their rehearsals. At Blue Skies Tom had access to some wind players so scored 2 pieces for oboe, bassoon, clarinet, whistle and Saskia Tomkins on violin.
There also were a number of private gigs, mostly weddings and mostly with long time partner Conrad Kipping.

Meanwhile Mark Haines spent the entire summer in Charlottetown doing a stage revue with other Island musicians called “Come All Ye”. It was a hit with EVERY show filled to capacity! Well done Mark.
He remains on Island and is just starting his private teaching season.