Posted on January 23, 2017 by Mealton
Hi everybody. Here is an excerpt from my show “Adventures of a SuperVet Tech” entitled “Euthanasia”, where I discuss euthanasia from the view of a Registered Veterinary Technician, people who deal with death and dying everyday.

I also relate the death of my sister, Linda, to this experience.

So many members of the public have come up to me after the show and said, “Thank you so much, I have an old cat and I’ve been so afraid of what’s going to happen. I’m not afraid anymore “.
This re-enforces my belief that a euthanasia done well can be beautiful thing. Please share this with anyone who may be helped with facing such a difficult decision.

Posted in Excerpts from the Show, Uncategorized, Video

My Vets : A Tribute

Posted on July 31, 2016 by Mealton
Posted in Excerpts from the Show, News, Uncategorized, Video 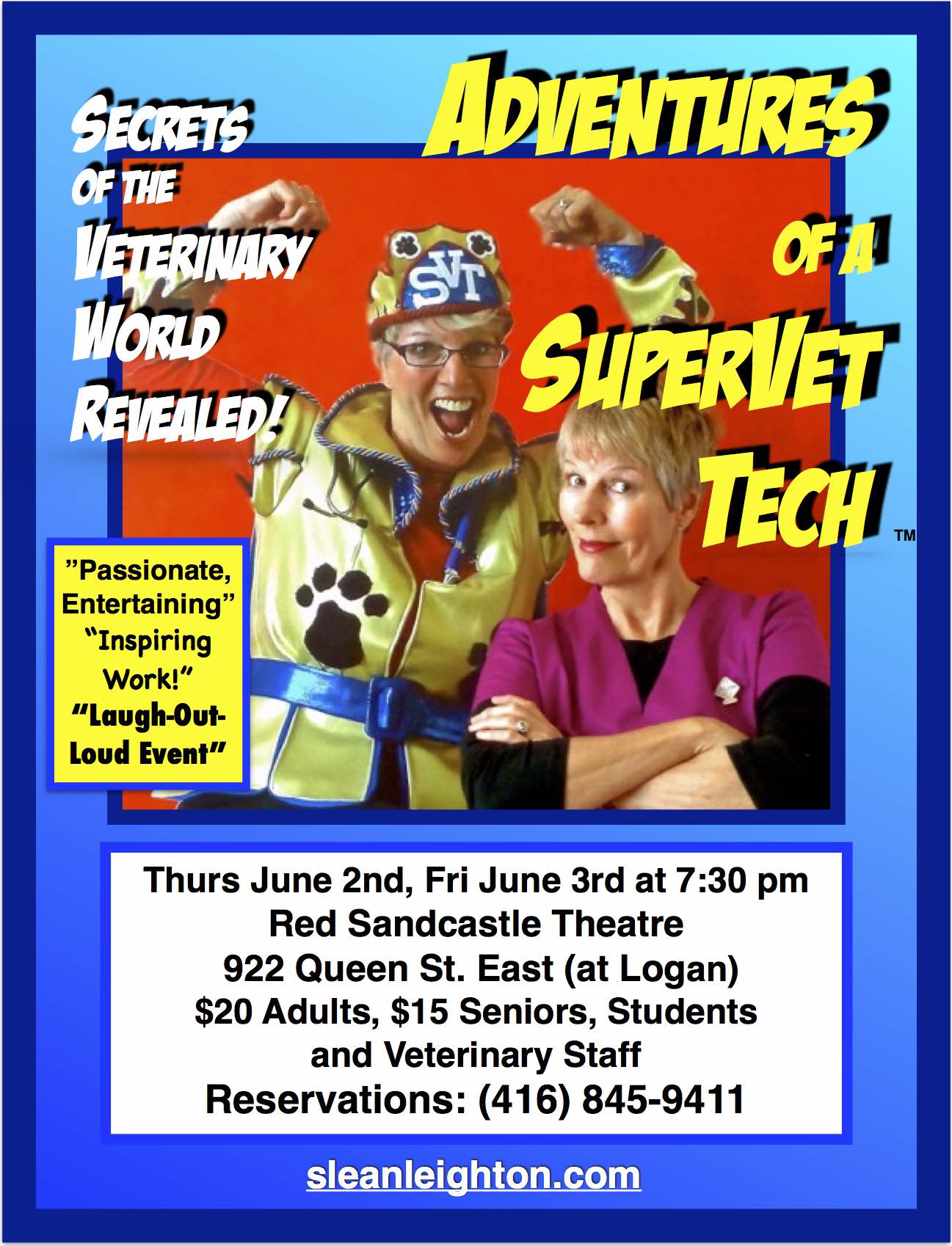 She’s coming back! And the hard-working workers at vet clinics get a special deal! On the heels of a successful Canadian Tour and after gaining rave reviews at the Toronto Fringe Festival 2015, “Adventures of a SuperVet Tech” returns to Toronto for 2 shows only at the Red Sandcastle Theatre, 922 Queen St. East, (at Logan), Thursday June 2nd and Friday June 3rd at 7:30pm. Prices are $20.00Adults, $15.00 Students, Seniors and Veterinary Staff Members. For reservations please call 416- 845-9411.

Don’t miss this ground-breaking show, a first for the veterinary world. 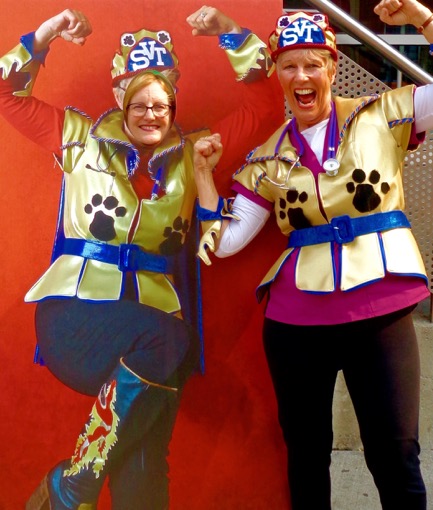 THIS JUST IN!!!!!!!!
The DYNAMIC DUO of Writer/Performer Sandra Lean-Leighton and Producer/Technician Pauline Tetley are going on tour with “Adventures of a SuperVet Tech” to 3 Ontario Colleges in 10 days; Ridgetown College March 30th, Algonquin College, Ottawa April 1st and St. Lawrence College, Kingston, April 8th. As always, this has fun written all over it.

Come to “Laugh Your Tail Off”, a fund-raiser March 16th in Kingston!

Come out and support the St. Lawrence Vet Tech Students and the Kingston Humane Society. It will be a fun filled evening with tons of laughs and excellent company. I won’t be performing that night but I’d love to meet you all.

http://kingston.absolutecomedy.ca/
Tickets are $10 (please see Holly Taylor or Satori Hiramatsu ) to pre-order.
There will be a 50/50 draw, tickets can be purchased at the door
Doors open at 8:00pm
The show will start at 8:30pm

The purpose of this event is to raise money to cover the cost to have guest speaker Sandra Lean-Leighton BA RVT visit St. Lawrence College to perform her show “Adventures of a SuperVet Tech”. https://tomleighton.info/sleanleighton.com/

Sandra is an actress with 21 years of experience and also has 20 years experience as a Registered Veterinary Technician. She has combined these two careers and written a one woman show about the daily trials and tribulations of a Veterinary Technician with a comedic twist. The show is meant to inspire future Vet Techs and share how the daily life of a Vet Tech can be crazy, full of surprises, physically & emotionally challenging, but also very rewarding. The goal of this show is to provide Vet Tech students with beneficial advice on how to be the best Technician you can be, prepare them with a few stories of common situations they can expect, also and how to deal with potential challenges.

Our goal is to raise enough money to cover the cost of having Sandra perform at our school and also to provide some refreshments for during the performance. However, we anticipate raising over and above the amount needed. So any money raised that exceeds our goal for the show will be donated to the Kingston Humane Society on behalf of the St. Lawrence Vet Tech Students. 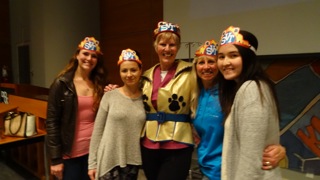 In the Toronto Fringe show Adventures of a Supervet Tech, Sandra Lean-Leighton shares tales from over two decades as a Veterinary Technician. This is a zany, energetic show that packs a few unexpectedly emotional punches. This marriage of Lean-Leighton’s rich background in theatre with the colourful experiences she’s had as a vet tech aims to shed some light on a valuable but underappreciated profession. As she puts it, she takes audiences ‘beyond the furry veil.’

Sandra Lean-Leighton spent the first two decades of her career in performance, finding opportunities in Canada and internationally, both behind-the-scenes and as an actor. She founded Lilliput Productions, a children’s theatre company for which she wrote, performed, and produced a number of successful shows.

Lean-Leighton really gives it her all in this multimedia show, and is unflappable onstage. She’s a confident and warm performer, and able to charm. These are skills she likely honed in children’s theatre, and they work just as well here.
Indeed, I could see this show playing well to a wide range of ages, so long as audience members are prepared for some gross-out humour and frank discussion of male reproductive equipment.
If you require your theatre to be Very Serious and Cerebral, this isn’t for you. Lean-Leighton wears a superhero costume for much of the show, and there are plenty of goofy moments. However, if you’re willing to go with the flow and have some fun, there are laughs to be had as well as things to learn!
There are also brow-raising tales, particularly when Lean-Leighton reveals a few of the stranger behaviours exhibited by the more eccentric pet owners she’s encountered. She’s never cruel, however. In fact, there are some poignant moments as she discusses death, dignity, compassion and pain in an understated way that is quietly moving.
I wasn’t sure what to expect from the show, but Lean-Leighton won me over with her charisma and commitment. She’s not afraid of a little razzle-dazzle, and I couldn’t help but grin in response. It’s clear she loves what she does – the acting as well as her work with animals – and that adds something undeniable to this show.
July 3, 2015 Allison Jones Mooney on Theatre
More reviews……
Adventures of a SuperVet Tech is a delightful production which exceeded my expectations. It is a passionate, entertaining and inspiring work. Some surprises: the amount of technology used in the field by a vet tech; the pathos evoked in the segment about euthanasia, which had a very personal aspect to it; and the description of the  CRAZY (her word) pet owners encountered. Fast moving, creative, and a great piece of theatre. Thank you Sandra for your WORK!!    Joan S. Toronto
And Another!
The show  re-ignited my student’s passion for the profession and  she felt much more confident in moving forward with pride and excitement.  She wanted to make sure that we knew how helpful the show was to her and thanked us for arranging your visit. I think that is proof-positive that you are achieving your goal of encouraging and inspiring these students! I was watching the students (and our staff) through the show, and lots of smiling, nodding and genuine enjoyment was evident!
Diane Boyle DVM Douglas College, Coquitlam, B.C.
Posted in FrontPage, News, Uncategorized

SuperVet Tech is coming to B.C.!

Go to https://www.eventbrite.ca/e/adventures-of-a-supervet-tech-tickets-18641160212 for tickets and more information. See you there! 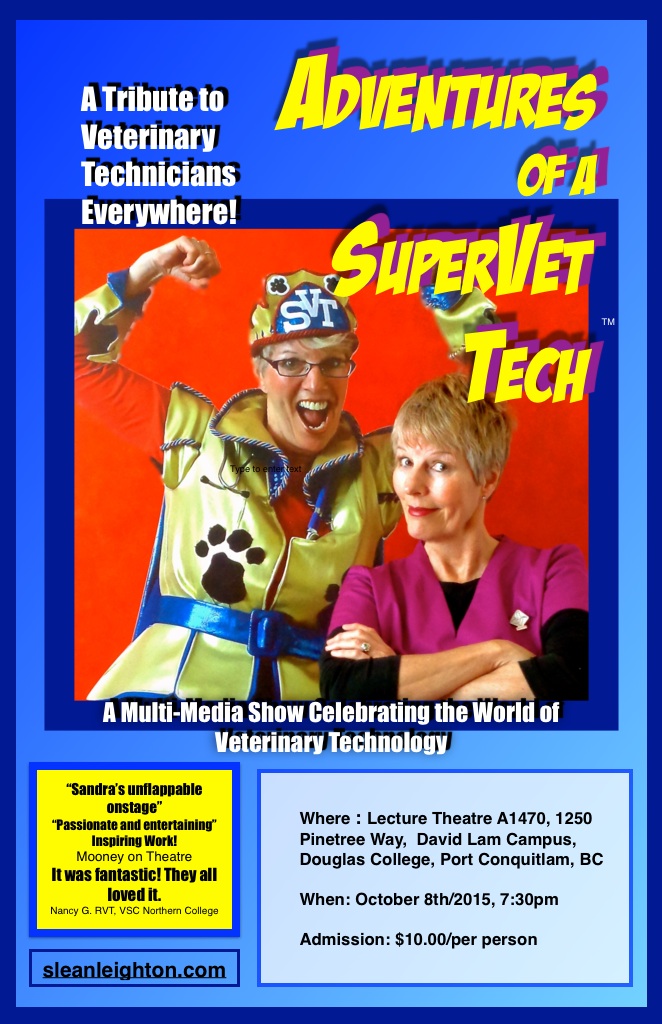 “Adventures of a SuperVet Tech ” is going on tour!

Adventures of a SuperVet Tech

(formerly “Behind the Furry Curtain”)!

A Tribute to Veterinary Technicians and their profession

• A 55 min. multi-media show designed to educate and inspire our future vet techs

• Starting at $500.00/show, this motivational presentation is designed to instil pride and provide encouragement for students entering the challenging world of the RVT.

•Featuring inside jokes, poignant moments and practical advice for the student vet tech

•Celebrating our achievements and vital role in veterinary medicine. 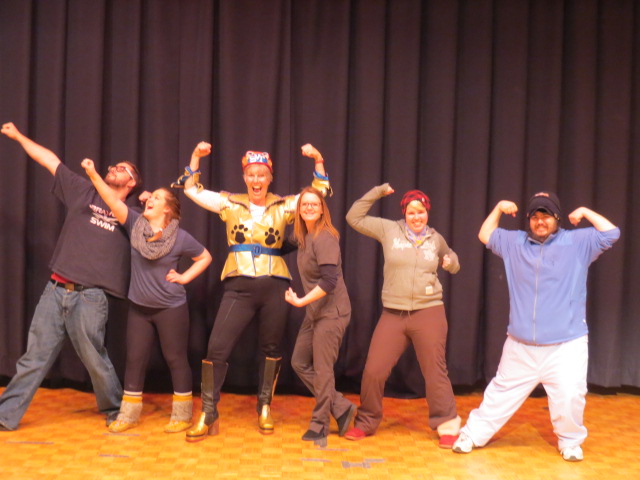 For the first 20 years of my working life, I was an actor, writer and theatrical producer. Since 1994, I have had the honor of working as a Registered Veterinary Technician.

We vet techs are the unsung heroes of the veterinary world and I aim to raise the public profile of this profession. Our work environment is funny, heart-warming, bizarre and at times tragic. It takes a very special person to withstand the emotional and physical demands of the job. But for those of us who do it, we wouldn’t change it for the world. It is to these amazing individuals, my fellow veterinary technicians, that I wish to pay tribute.

I am thrilled to be taking my show “Adventures of a SuperVet Tech” to veterinary and vet tech colleges, as well as conferences, as a motivational vehicle to veterinary technicians everywhere.

The Haileybury Campus hosted a laugh-out- loud event on February 4, 2015, during Student Development Hour. Of special interest to the many Veterinary Sciences students in Haileybury, Sandra Leighton presented her one-woman show, “Behind the Furry Curtain – A Lighthearted Glimpse into the Veterinary World”. The show was presented to a full house, and discussed the topic “What is a Vet Tech?”. Using her twenty years of experience, Sandra has created a hilarious show that discusses some of the responsibilities she has been tasked with during her years in the field. The event was a fantastic stress-buster for our students,

Hi Everyone!!
I just wanted to let you know that Sandra came to perform her “Behind the Furry Curtain” show at Northern last week, and it was fantastic! I invited all VT students, Wildlife students, companion animal rehab and VA’s and Groomers, and they all loved it. It also encouraged some VA’s and Groomers to want to continue their education and become VTs. The best part was that it really seemed to raise everyone’s spirits and that was much needed as the winter blues are starting….!

Going to the AVTE in Niagara Falls!

Delighted to be going with promotional material in hand to the AVTE Symposium in Niagara Falls July 31 – Aug1/15. There, veterinary technician educators from across North America will be gathering for this 3 day event. SuperVet Tech will be there to promote her upcoming tours of Ontario and the Pacific Western States. 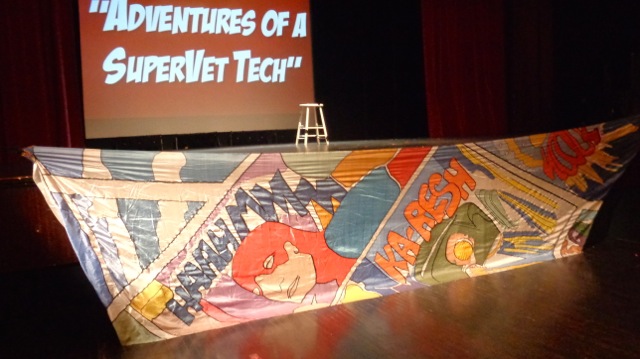 “Adventures of a SuperVet Tech ” set. Designed by Charlotte Dean